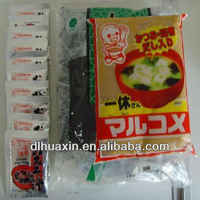 Wakame  is a sea vegetable, or edible seaweed. It has a subtly sweet flavour and is most often served in soups and salads.

Sea-farmers have grown wakame in Japan from the Nara period.[1] It has been nominated as among 100 of the world's worst invasive species according to the Global Invasive Species Database.

History in the West

In 1867 the word "wakame" appeared in an English-language publication, A Japanese and English Dictionary, by James C. Hepburn.

Starting in the 1960s, the word "wakame" started to be used widely in the United States, and the product (imported in dried form from Japan) became widely available at natural food stores and Asian-American grocery stores, due to the influence of the macrobiotic movement, and in the 1970s with the growing number of Japanese restaurants and sushi bars.

New studies conducted at Hokkaido University have found that a compound in wakame known as fucoxanthin can help burn fatty tissue. Studies in mice have shown that fucoxanthin induces expression of the fat-burning protein UCP1 that accumulates in fat tissue around the internal organs. Expression of UCP1 protein was significantly increased in mice fed fucoxanthin. Wakame is also used in topical beauty treatments. See also Fucoidan.

Wakame is a rich source of eicosapentaenoic acid, an omega-3 fatty acid. At over 400 mg/100 kcal or almost 1 mg/kJ, it has one of the higher nutrient:calorie ratios for this nutrient, and among the very highest for a vegetarian source.[8] A typical 1-2 tablespoon serving of wakame contains roughly 3.75–7.5 kcal and provides 15–30 mg of omega-3 fatty acids. Wakame also has high levels of calcium, iodine, thiamine and niacin.

In Oriental medicine it has been used for blood purification, intestinal strength, skin, hair, reproductive organs and menstrual regularity.[9]

In Korea, the wakame soup miyeokguk is popularly consumed by women after giving birth as miyeok contains a high content of calcium and iodine, nutrients that are important for nursing new mothers. Many women consume it during the pregnancy phase as well. It is also traditionally eaten on birthdays for this reason, a reminder of the first food that the mother has eaten and passed on to her newborn through her milk, thus bringing good fortune for the rest of the year.

Japanese and Korean sea-farmers have grown wakame for centuries and they still are the main producers and eaters.[citation needed] Since 1983 wakame is also cultivated in France, in sea fields established near the shores of Brittany.[10]

Wild grown wakame is harvested in Tasmania, Australia, and then sold in restaurants in Sydney[11] and also sustainably hand-harvested from the waters of Foveaux Strait in Southland, New Zealand and freeze-dried for retail and use in a range of products.

Wakame fronds are green and have a subtly sweet flavour and slippery texture. The leaves should be cut into small pieces as they will expand during cooking.

In Japan and Europe, wakame is distributed either dried or salted, and used in soups (particularly miso soup), and salads (tofu salad), or often simply as a side dish to tofu and a salad vegetable like cucumber. These dishes are typically dressed with soy sauce and vinegar/rice vinegar.

Goma wakame, also known as seaweed salad, is a popular side dish at American and European sushi restaurants. Literally translated, it means "sesame seaweed", as sesame seeds are usually included in the recipe.

Native to cold temperate coastal areas of Japan, Korea and China, in recent decades it has become established in New Zealand, the United States, France, Great Britain, Spain, Italy, Argentina and Australia.[14] It was nominated one of the 100 worst invasive species in the world.

In New Zealand, wakame is declared as an unwanted organism. It was first discovered in Wellington Harbour in 1987 and probably arrived accidentally in the late 1980s, via shipping from Asia contained in ballast water.

Wakame is now found around much of south-eastern New Zealand, and as far north as Auckland. It spreads in two ways: naturally, through the millions of microscopic spores released by each fertile organism, and through attachment to vessel hulls and marine farming equipment. It is a highly successful and fertile species, which makes it a serious invader. However, its impacts are not well understood and are likely to vary, depending on the location.

Even though it is an invasive species in 2012 the government allowed for the farming of wakame in Wellington, Marlborough and Banks Peninsula.

The sea plant has been found in several harbors in southern California. In May 2009 it was discovered in San Francisco Bay and aggressive efforts are underway to remove it before it spreads.