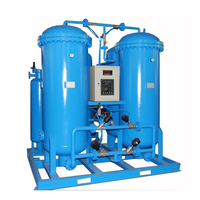 Pressure swing adsorption (PSA) is a technology used to separate some gas species from a mixture of gases under pressure according to the species' molecular characteristics and affinity for an adsorbent material. It operates at near-ambient temperatures and differs significantly from cryogenic distillation techniques of gas separation. Specific adsorptive materials (e.g., zeolites, activated carbon, molecular sieves, etc.) are used as a trap, preferentially adsorbing the target gas species at high pressure. The process then swings to low pressure to desorb the adsorbed material.

Pressure swing adsorption processes rely on the fact that under high pressure, gases tend to be attracted to solid surfaces, or "adsorbed". The higher the pressure, the more gas is adsorbed; when the pressure is reduced, the gas is released, or desorbed. PSA processes can be used to separate gases in a mixture because different gases tend to be attracted to different solid surfaces more or less strongly. If a gas mixture such as air, for example, is passed under pressure through a vessel containing an adsorbent bed of zeolite that attracts nitrogen more strongly than it does oxygen, part or all of the nitrogen will stay in the bed, and the gas coming out of the vessel will be enriched in oxygen. When the bed reaches the end of its capacity to adsorb nitrogen, it can be regenerated by reducing the pressure, thereby releasing the adsorbed nitrogen. It is then ready for another cycle of producing oxygen-enriched air.

It's the core of the whole equipment, It produdces N2 through PSA techology, composed of two adsorption towers filled with carbon molecular sieve and automatic control valves.

Storage N2 for ensuring the gas supply smoothly and continuously, composed of N2 buffer tank, valves and other components.

It's the control center of the whole equipment, composed of PLC,electrical systems, instrumentation and valves.

How to get a prompt quotation?

Do not hesitate to send us mail with the following data.

All systems are designed for un-attended operation and automatic Oxygen demand adjustment.

The design and Instrumentation makes the plant size very compact, assembly on skids, prefabricated and supplied from factory.

Start-up time is about 30 minutes to get desired Oxygen purity. So these units can be switched ON & OFF as per Oxygen demand changes.

It's very reliable for continuous and steady operation with constant Oxygen purity. Plant availability time is better than 93% always.

1. The system adopts the one-click start way,Air compressor,Refrigerated Air Dryer, Adsportion dryer,Generator will start to work following the program one by one.

2. The oxygen generator equipped with unqualified oxygen gas warning alarm and automatic vent out ,then it can make sure that all oxygen that goes into the pipeline is good quality.

3. The oxygen generator equipped with colorful touch screen from Siemens Germany ,it can display the running condition , purity, pressure, and nitrogen rate of flow of whole system on-line;And it can also remind the maintenance time,record the trouble alarm, download the operating data.

Q: Can you do OEM service ?
A: We can provide the specific products needed around the world at significantly lower costs.
TAYQ also offers a Private Labeling Program to provide high quality lab supplies at lower prices.
If you need further information regarding our OEM or Private Label programs, please contact us freely.
Q: How long is your delivery time?
A: Usually, delivery time is 10-15 days depend on the order quantity &  inventory.
Q: How about your quality warranty ?
A: Normally all CHINCAN products are supplied with a warranty of 12 Months from the date of shipment.
Q: What is your terms of payment ?
A: Payment 100%  T/T, Western Union, L/C, Trade Assurance, Credit Card ect. in advance ,before shippment.
If you have another question, pls feel free to contact us as below.