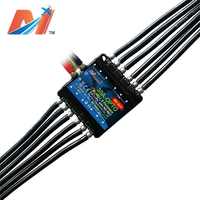 Features: MCU: 24MHz EFM8BB10F8 FETs: Peak 120A 3oz copper PCB Thrust performance equivalent to F39x ESCs miniquadtestbench.com BLHeli_S is an improved version of the base BLHeli code. It comes with new code geared for new hardware in ESC’s (electronic speed controllers). It uses the BLHeli 14.5 base firmware revision and improves upon it.

In terms of firmware, compared to the the previous version of BLHeli:
1. BLHeli_S delivers a throttle response that is Smooth as Silk, and the main factor contributing to this, is that it uses hardware to generate motor PWM. Two MCUs support this for BLHeli_S, namely the BusyBee1 at 24MHz (EFM8BB10F8) and the BusyBee2 at 48MHz (EFM8BB21F16).
2. BLHeli_S has good Sync holding properties even not better.
3. You cannot switched off damped light.
4. BLHeli_S has motor PWM that is Synchronous to the MCU master clock, as it is generated by hardware. This makes the motor Silent.
5. BLHeli_S has very Small throttle Steps. The resolution varies between hardware configurations (MCU clock speed and driver type), and is between a nominal 512 steps and 2048 steps.
6. BLHeli_S supports very high motor Speeds. A BB1 MCU will support 350k erpm, and the limit of the BB2 is not yet known, so the code is set to limit at 500k erpm.
7. BLHeli_S supports regular 1-2ms input signal, as well as Oneshot125, Oneshot42 and Multishot. Autodetected when the ESC sees an input signal.
8. Configuration and setting up is the same as regular BLHeli ESC, you can program the ESC through FC. If you have a regular setup, just install and go fly (calibrate if your throttle range does not match BLHeli_S default). Or if you need to configure or update, just do so with the Simplicity offered by connecting to your ESCs through the FlightController, using BLHeliSuite and a USB cable.
Hardware Changes:
The changes in programming are directly related to the ability of improved hardware that is being implemented. As SSKaug mentioned, this new line of ESCs are running the BusyBee1 (EFM8BB10F8) and the BusyBee2 (EFM8BB21F16) MCU’s (Microcontroller Units). These two MCU’s are different than the previous Silabs chips that many ESC’s have been using. The reason these MCUs are going to be better is because instead of using software PWM they will be using hardware PWM that is synced to duty cycle.
The great thing about using dedicated hardware to generate the PWM is that the speed at which the ESC writes the values to the motors is doubled! With old Blheli ESCs and software generated PWM signals, the ESCs write to the motors at a 16khz rate. With hardware generated PWM it’s bumped up to 36khz. These means that your motors are getting input even faster which allows for better response. KISS ESC’s are an example of this. They have hardware generated PWM and the smoothness and response you get with those is hard to beat.
All these improvements look promising and when reached, definitely will change the way our multirotors fly!
Related Products

Production
Packing & Delivery
Our Company
Maytech Electronics Co., Ltd. Maytech Electronics Co., Ltd. is devoted in designing and manufacturing Brushless ESCs, Brushless motors, Propellers, Analog and Digital Servos for RC models, such as Electric skateobards, Robots, Drones RC aircrafts, Helicopters, Boats, Cars and Truggies.
Special design requirement, OEM and ODM orders welcome!
Exhibition
Certifications
FAQ
1.Who is Maytech and what we are doing? MayTech designs, develops and manufactures brushless ESCs, motors, servos and propellers for radio-controlled(R/C) models, UAV drones, electric skateboards, electric tools, etc. Based in Shanghai, we are the best established and responsible R/C electronics manufacturing company in China, having been in constant production since 2006. Till now, we have the most comprehensive production line for servos, motors, ESCs, propellers, extensions, etc. All our products design and development is done by our own engineers and skilled staff. Quality control is strictly maintained.Depending on good quality and security performance, Maytech has achieved series of safety testing or accreditation from many authoritative institutions such as FCC, RoHS, Europe CE, China Information Industry Ministry and several domestic enterprises, etc. To meet the ever increasing business demand and production requirements, we accept customized designs and special specifications. OEM and ODM orders welcome! We will always be your responsible, reliable and professional quality partner in RC business. Our commitment: Offer the best possible products, with the most reasonable price.
2.How to be Maytech distributor or dealer? Please provide your info below: 1. Contact person name, contact info 2. Pls introduce your company info, including your current hobby company's name &business license. (It will be great if you can provide a photo of your shop or company) 4. Your company address, telephone NO and fax number. 5. Your company's website (if you have one) Please understand that we do not sell to end customers if there is our distributor/dealer in your country, so you must talk to one of our distributors or dealers if you wish to get MAYTECH products.
3.What is Maytech warranty policy? For ESCs and Motors, the warranty is 2-year since the day you received the parcel; For propellers, the warranty period is 6 months since the day you received the parcel; When you found some items faulty due to our production or materials, pls give me follow info for me to take care of the matter: First, take video or pics to show the problem . Second, tell me the quantity, Third, kindly let me know the faulty items from which order.
4.What shipping methods Maytech accept? Maytech cooperated with official big express and air-freight company, in order to make sure all parcels in safe conditions. UPS, DHL, TNT, FEDEX, EMS, Post all are available. Just let us know when you have special requirement on shipment. Semi-Automatic PET Bottle Blowing Machine Bottle Making Machine Bottle Moulding Machine PET Bottle Making Machine is suitable for producing PET plastic containers and bottles in all shapes.
Home > Toys & Hobbies > Toy Vehicle > Radio Control Toys