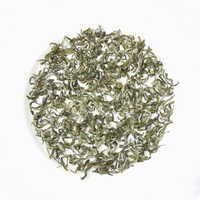 Growing area: This tea is originated in Zhejiang famous Pu Tuo Mountain, which is the famous saint land of Buddhism with very favorable natural environment.

History & Character:  Buddhist tea is originated in one of the four China major Buddhist shrines, called Putuo Mountain.  There are Bodhisattva temples everywhere and many monks, so incense is very strong.  Every spring, Buddha congregation are picking the tea leaves around Putuo mountain, in chanting to Buddha, then make the tea curled and dryin the fried pan, and present it as a gift to each other.

Because of its special shape, aroma lasting and refreshing taste, people like to drink it.  it is known as "fairy tea", the gift between Buddhist monks and friends, an indispensable cup of mellow aroma. Gradually, the incense believers also enjoy this fairy tea when they pray to the Buddha.  As this tea   produced in Buddhist Putuo Mountain,  so called "Buddha tea.