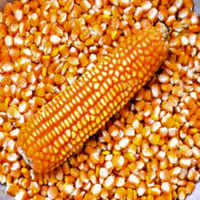 Corn is considered both a vegetable and a cereal grain.

Sweet corn that you eat off the cob is usually considered a vegetable in the culinary world, whereas the dry seeds that are used for popcorn are classified as whole grains.

Corn originated in Mexico over 9,000 years ago and is known by its original name “maize” in many parts of the world. Native Americans grew and harvested this crop as the main source of food (1Trusted Source, 2Trusted Source).

Today, it’s one of the most widely consumed cereal grains worldwide (3). Corn is usually white or yellow but also comes in red, purple and blue. It’s eaten like sweet corn, popcorn, tortillas, polenta, chips, cornmeal, grits, oil and syrup and added to countless other foods and dishes.

Corn is high in carbs and packed with fiber, vitamins and minerals. It’s also relatively low in protein and fat.

Corn contains antioxidants and plant compounds that may provide a number of health benefits.

Corn is particularly high in lutein and zeaxanthin, two carotenoids that may prevent cataracts and age-related macular degeneration (AMD).

One study in 365 adults found that those who had the highest intake of carotenoids — especially lutein and zeaxanthin — had a 43% lower chance of developing AMD compared to those with the lowest intake (11Trusted Source).

Therefore, regularly eating corn may promote eye health — especially for those who are at risk of AMD.

May Prevent Diverticular Disease and Other Digestive Issues

The fiber in corn may also provide health benefits.

Dietary fiber intake has been linked to a lower risk of several diseases, including heart disease and some cancers. Even more, eating enough fiber promotes healthy digestion and may protect you against gut issues (12Trusted Source, 13Trusted Source, 14Trusted Source).

Corn, in particular, may protect against specific digestive issues, including diverticular disease, which is characterized by inflammation of the digestive tract (15Trusted Source).

One 18-year study in over 47,000 adult men associated eating popcorn at least twice a week with a significantly lower risk of diverticular disease (15Trusted Source).

Based on these limited results, eating corn and popcorn may promote gut health and prevent digestive diseases. However, more research is needed.